Buying equipment for our new Baby, is it all necessary?

Preparing for a baby can be expensive, High Chair, Baby Monitor, Bottle Warmer, Cot, Bath, Changing Mat, Pram, Bottles, Stair Gates, Car Seat, Sterilizers, Baby Bouncer, etc. The list is endless. But is it all necessary? Soon to be Dad thinks not! 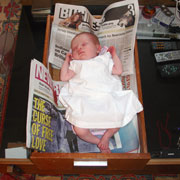 I don't need to learn many lessons twice, when Clare handed me a list she was working on of items we needed to buy before the baby was born, It brings to mind one such lesson which is burned into my memory. I warn you this article isn't short.

My Grandfather was a Blacksmith, and he made a Sled for my Sister and I. The kind of Sled you see in old movies, and on Christmas cards. I remember vividly excitedly watching as my Dad struggled to get it out of the loft. Then my Sister and I would try and drag it to the nearest park, which was no mean feat as it weighed a ton.

We lived on a little hill so tried to ride it down, but it would stubbornly refuse to move so we had to pull it by a rope, watching the other kids glide by on their plastic versions. For the first hundred meters or so it would leave an orange/brown rusty trail, if the thickness of snow dipped beneath 4 inches the sled would plow through the snow and scrape along the tarmac beneath. We were made to wax the skids before we left but it didn't seem to make any difference.

When we eventually got to the local park we began the herculean task of dragging it up the big hill, motivated by the thought of sledding back down. The other kids would have been up and down the hill several times before we managed to get to the top.

Once at the top we would both push the sled to get it going then jump on board. I swear, if we had hit anyone on the way down we would have killed them. There was no real way to steer the thing, it only wanted to go in one direction. The kids used to make a ramp out of packed snow at the bottom of the hill, which our sled would promptly level as though it weren't there. Nothing it seemed could stop us, but a little patch of mud at the bottom of the hill did just that. It stopped the sled dead as those skis my Grandfather had forged by hand drove deep into the mud, and all that momentum was given to a 5 year old me and his 11 year old sister. A memory I still have almost 30 years later.

Meanwhile a handful of older and wiser kids were having much more fun. They each had a sled that they could run up the hill with, which they could launch themselves over the snow ramp on, and they could even fold them up and put them in their pockets. These 'Super Sleds' where also called plastic carrier bags.

That day I learned my lesson, never since have I weighed myself down with impractical, top heavy solutions when there is a simpler lightweight solution available. The story sounds amusing but I'm actually pretty serious, anyone who knows me well you will tell you I go on holiday for 2 weeks with no more than a small shoulder bag. I barbecue using the grill from my oven standing on a small pile of bricks. Unlike my Father I don't carry a wallet the size of a full roll of toilet paper containing enough to set an illegal immigrant up with a new identity. Just one bank card, some change, and a few notes.

Anytime I've parted from this mindset I've regretted it. When we got our first puppy (German Shorthaired Pointer called Henry) Clare talked me into getting the works. Bed, bedding, water bowl, food bowl, shampoo, teething toy, nappy pads (oh yes you can get nappy pads for dogs), even a post to put in the garden with a special scent to encourage the dog to pee in that area, and some spray to encourage them not to chew things.

The bed, and bedding were promptly eaten. The dog went to the toilet on everything but the nappy pads, when it did make it to the garden it didn't pee anywhere near the peeing post. The teething toy was discarded in favor of my running shoes even though they were sprayed with the 'no chew' spray.

Our second puppy (Shorthaired Pointer named Harvey) got a cardboard box for a bed, and newspaper for his daily ablutions. He was just as happy as our first dog, and I was much less stressed.

Which brings me to the baby list, I thought we could sleep the baby in an open drawer in the bedroom, or in a box like Harvey. Jesus managed perfectly well in a manger with a bit of straw so I'm told. Okay even I'm not that harsh, Clare's parents had kindly spent over £600 on a pram for us, which I assume means it's a pretty good pram. I honestly thought the baby could sleep in the pram, we could move it from room to room easily, no need for a travel cot as we could take it to Clare's parents with us when we stay, the perfect practical solution. The pram is probably a more comfortable, safer, place to sleep than what I was put in as a child in the 70's. Which probably had a fireproof asbestos mattress and was finished in lead paint.

Clare thinks we need to spend another £600 on a Cotbed, which needs a special mattress and bedding, and a 'bumper'. What's a Bumper I ask? Some padding you strap to the side of the cot so Baby doesn't bang it's head. I'm thinking that my solution of using the pram is looking even better now, I mean there is no need for a bumper for a start. By the way, the bumper cost £60 but comes with some bedding which you can't use until the baby is at least 10 months old.

Next on the list a Baby Bath, you can probably guess my response. What's wrong with the sink, or even a bucket? Clare offered no argument, she just looked to the sky and shook her head. 'I'll talk about the list later when you are ready to be serious' she said.

Well our relationship is pretty old fashioned. Clare likes a man to be a man and I like my women to be real women. None of this 'new man' or 'metrosexual' business, Clare makes the bed, I check the oil in the Car, Clare does the dusting, I take the bins out. So you can imagine what had to be done! I had to drive her to Mothercare and 'Babies R Us' to buy everything on her list.

We now have a nursery kitted out with everything on the list. Even a 'Changing Mat' surely a towel would have done the job? I sit in the nursing chair looking around dazed, remembering sliding down that hill with my Sister on the Sled. Wondering if I'll be writing an update to this article sometime in the future with baby number 2 and a big dose of hindsight.

Oh and before I end this article guess what I saw in the baby bath section of Mothercare? A 'Baby Bucket', a plastic bucket called a 'Baby Bucket' for bathing a baby in. When I smugly pointed this out to Clare she said it was a 'special baby bucket' and would be different to a bucket you can pick up at a DIY store for a few quid. The only difference I could see was the price!