Planning and Having a Christening

With less than 24 hours until 50 people were due to turn up at our house, the house was half decorated, no food prepared and half the people meeting us at the Church for the Christening had decided it would be better to meet at our house between 9:30am and noon. The Christening was to take place at 12 noon on Sunday 29th April 2007.

picture of baby being Christened

Our little girl was eight months old when we had her Christened. The Christening was to take place at 12 noon with everybody coming back to our house after the Church service for food and drinks. We had 50 guests coming to the Christening and there was more to organise than I realised.

The Church and Vicar had to booked in advance. There was a cake and champagne to organise, invitations to send, a dress for Amélie to acquire, food to prepare and a house to finish plastering and decorating.

We booked The Trinity Methodist Church and were very lucky to have a wonderful Vicar. He came to the house to meet Alex, Amélie and myself and give us a brief summary of how the service would go. As he walked into the house it felt like he brought a ray of light in with him. What a wonderful man and Amélie took to him instantly. He had such a presence that after he had gone when Alex and myself were discussing him Alex said that he had such a bearing that he would consider dying just to get buried by him. Now that is saying something.

Unlike a wedding you do not have to pay the Church for a Christening even if you have a Christening taking place outside of the normal Sunday service. The service was about 20 minutes long. Most of the service takes place with both Parents, Baby and the Godparents standing at the Font with the Vicar. It is quite informal but as mentioned before you do have to book for a Christening to take place.

We chose two Godmothers and a Godfather for Amélie. For a boy it is two Godfathers and a Godmother. When choosing her Godparents we had a couple of stipulations when drawing up a list. The first was we wanted Godparents that were not too old so they would be around as she grew up. Secondly we wanted Godparents that had taken a lot of interest in her from the day she was born. Amélies Godfather was the first person other than Alex and myself to see her at the hospital. Her two Godmothers had provided the utmost support throughout my pregnancy and from the day Amélie was born. 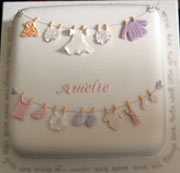 picture of Christening Cake
The Cake

There is a Christening cake to organise. We were lucky enough to have one of Amélies Godmothers organise the cake for us. Old tradition is that the top tier of the wedding cake is kept for the first born child's Christening cake. The cake was a fruit cake with royal icing which was so beautiful it was hard to cut so we have kept and wrapped it for Amélies first birthday.

Champagne for everyone for the first drink when arriving back at the house. Once again we were lucky as Amélies other Godmother provided the champagne for the occasion. It is not an essential to have champagne but we thought that it would be a nice thing to do as the guests arrived at the house.

After the service we had all the guests back at our house where we provided a light buffet and drinks. We gave the guests a glass of champagne on arriving, followed by beers, wine, tea, coffee or soft drink. A lot of people hire a place out with a buffet and cash bar. We worked out the costs of both and thought it would be a much more relaxed atmosphere to have everybody at the house where the older guests could relax more and the children could roam and play more freely.

The afternoon progressed well with everybody enjoying themselves, the last guests leaving at around 11pm.

Amélie received lots of beautiful gifts. Here a list of some of the gifts that she received, in case you are trying to think of a gift for a Christening.


The day went off well, a lot of stress beforehand organising and preparing our house for the event but it was all worth it. Amélie was an angel and behaved impeccably. She enjoyed the day and all the fuss. I don't think we could of asked for the day to have gone any better than it did, a memorable day for both of us.

ellie catchesides
how many godparents can a child have? would it be ok for my child to have 6? 4 godmothers and 2 godfathers... i have 4 best girl friends who have supported me since day one of my pregnancy,one of them even sat with me throughout my labour. They have all been there for me when i needed them most and since the birth of baby George have given me untold support and its too hard to eliminate them. would i be able to have 6 godparents for my child? x
Mum
I don't think there is any set rule as to how many Godparents you can have. The tradition as far as I know was to have 2 Godmothers and a Godfather for a girl and two Godfathers and a Godmother for a boy but I have known other people to have two lots of each and more. My niece has two Godmothers and two Godfathers.