I think my previous article proved too good to be true. It may be a coincidence but 2 days after her first set of immunisations Amélie isn't doing too well. 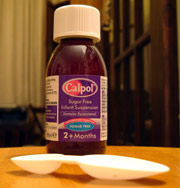 Amélie had her first set of immunisations 2 days ago. On the day she was fine, the day after she was fine but today (2 days later) she isn't too good.

When she woke up she had a bit of a blocked nose and was sneezing a lot. I went swimming at around midday and Clare took Amélie to watch. Over the space of an hour she had got much worse, her cheeks were very red and we could now hear some rattling when she was breathing. We took her right home and took her temperature which was normal.

She didn't feed very well, and cried a fair bit. The cry was a different cry to what we have heard in the past, so instead of our usual ignoring of the crying until she stopped we picked her up every time and tried to console her. It was very difficult to calm her down, and she really does look unhappy. We have held off giving her any medicine as yet, any mucus is clear and she doesn't have a temperature as yet.

This is the first day of illness she has had since birth. We can't be sure it was caused by the immunisations but it does seem more likely than not. Clare and I don't have any symptoms, and out of the 77 days she has been with us it seems more than a coincidence that on the 75th day she had the immunisations and on the 77th her first cold.

Naturally we still stand by our decision, rather a day or two of a cold than a serious disease that may leave her with long term health problems. Although any form of unnecessary medical intervention bothers me. We took a healthy baby with no previous history of illness to the doctors, and perhaps because of that she is now ill. No matter how sure I am that we did the right thing, that will always stick in my throat.