First round of childhood immunisations

This morning we took our baby for her first round of immunisations. Two injections, one in each thigh. One of many decisions we will have to make for her during her lifetime, I hope we made the right call on this one. 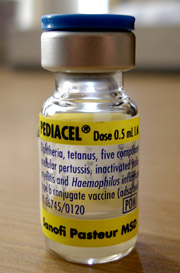 If you haven't read many of our articles you may not know about my fear of injections. I've avoided the hypodermic for well over 2 decades, and once passed out during a visit to the Vet with my dog.I wasn't always this way, it was a gradual fear that built up over time. My only other fear is flying, again a fear that built up gradually. My father had a fear of flying and a fear of all things medical and it would seem more than a coincidence that I'd ended up with the same 2 fears.

I'm mindful that I could pass this on to my kids, so Clare and I decided that I would hold Amélie for her injections and never show any outward fear. I'd managed to visit my Mother in Hospital before she sadly passed away, and I'd got through a 27 hour Labour, so it seemed I could control the fear when needs must.


On the walk to the doctors I was feeling a little odd, so Clare peeled off to get my a sugary drink and met me at the doctors surgery. As we walked in we could hear a baby screaming and this set Amélie off crying, but we managed to calm her pretty quickly. Around 2 or 3 minutes later a woman came out with 2 kids, one of which had just had an injection (looked a little under a year old) and was screaming. Her mother didn't exactly set our
minds at rest, and her parting words were 'wait until they have the MMR, they will tell you for weeks how much you have hurt them'. Seconds later we were called in for our appointment.

A quick segway for the science stuff. This was the new immunisation which is given at 2 months. We were about 10 days over 2 months. The diseases this protects against are; Diptheria, tetanus, pertussis (whooping cough), polio,and Haemophilus influenzae type b (Hib) Pneumococcal infection. The vaccine given was; DTaP/IPV/Hib and Pneumococcal conjugate vaccine (PCV). The next injection is given 4 weeks after this one.

We were asked if we wanted a plaster after the injection, or if we just wanted to leave it. We opted to leave it, a plaster may be one other thing that could draw attention to the experience for her. Also we would have to take the
plaster off at some point which may not be pleasant.

Clare explained my fear, and we asked if we could take a picture of the little vile for our article. The nurse didn't seem happy about me holding Amélie and tried to convince us it was a bad idea. We stuck to our guns though and I held little Amélie on her front over my knee. I held her by the calf with a pretty strong grip, so she couldn't move her leg when the needle was in her thigh. I wish I could tell you she didn't cry, but she was crying before she was even injected. She did seem to sense something, even though Clare and I were outwardly pretty calm.

The injection was quick and she didn't seem to suffer at all, even though she was already crying. I could kind of feel a pulse in her calf when the syringe was depressed. All my usual signs of keeling over were there, muffled ears, cold hands, dry mouth. I'd done it though, got through it, I couldn't believe it when the nurse asked me to turn her over for the second injection. I had only expected one, but the second was just as quick and I was managing to keep calm.

I then handed her to Clare and stood up, my vision was all messed up but I didn't tell Clare or the Nurse and I was back to normal pretty quickly anyway. There were a few spots of blood but nothing to write home about. She stopped crying when we put her in the pram, and she slept quietly while we did a bit of shopping and walked home. Clare has just fed her, and she took the feed just like usual and is now quietly sitting in her swing.

We took her temperature as soon as we got home so we could compare it later tonight and tomorrow. The Nurse said there is a possibility of a fever and to give her calpol if she develops a temperature. She also said that it could feel lumpy near the injection site, and that could remain for weeks. We are keeping our fingers crossed that she doesn't suffer from any side effects,anything over 37.5 C degrees is a fever. Over 39 degrees and you should call the doctor immediately. If anything does happen we
will post it on the site but at the moments she seems fine.

Felisa Rodriguez
I guess I could say I know what you whent trough I felt sharply the same when my first son got his shots I was terifyed I felt like killing the nursr at a moment the hardest part is that I was alone and no one was there to give me any kind of sopport so I had to be strong not just for me for my baby when I had to hold my son he didn't stat crying till I hold him thight in my arms as I seen the needle go in I started crying at the same the he did and I till you it still hurst just remembering but the good things is that he was calm as the water after wards now on my second son his father was there but it was more frightning because I couln'd go thru with it I had to tell him to hold the baby cause its a harsh feeling and so he held him but as well he felt so much emotion seeing his first son get hurt his eyes got watery but he as you tried to cover it from me but it was just to obvious and he let me know after ward that it doesn't feel quite nice to be the one who has to hold the baby because in his words he felt that the baby whas at him after words and the baby did show some type of neclection towards him he did't feel good being with him till I hold him he stop crying and at the whole time whe where still in the doctors office and the nurses made my husband feel more uncomfortable especially when the baby stoped crying with me well so far my children are 3yrs and the baby 10mnths and till this day it just cain't get any better more tears and more neglections for both of us especially from the 3yr old he ask what did he do wrong for us to take him with the mean nurses who poke him he doesn't understand that its going to be a routine most of his life so I wish you both a good luck and it is best whe always try to keep our cool for them and to be calm for us and always try to come up whit different reasons why shots are good for us.