Back from 2 weeks break for half term, we took our baby on her 27th swimming lesson this morning. Some new techniques were introduced again, so as usual I'll try and break them down so you can try too. 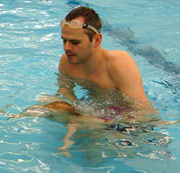 I'd always thought a couple of the mothers in my swimming group looked familiar. I left my home town over a decade ago and have only recently returned, so I couldn't quite place them. As I was getting into the pool today I saw an old friend and realised that one of the regular mothers in our group was his wife. I'd not seen her for a decade which is why I couldn't place her.

Sometimes dads turn up to watch from the sidelines, but he just jumped in with the rest of us and took a few photos and joined in. It's great that we have that informality about the lessons, I'm not one to join organised groups. I prefer to go off piste, so I've been lucky that the other parents and the instructor are relaxed types.


Pretty soon we were lined up to do the glide swim. The instructor stood well back today, over half the width of the pool so I got to do a really good one. We did a few of the latest routines, monkey monkey and horsey horsey. She loved horsey horsey as usual, but struggled with monkey monkey. If you missed explanations of these routines check back to previous articles. We also did the cross over swim, which was introduced in the previous lesson where you swim and catch in pairs.

Last lesson a new routine was introduced. An underwater swim towards the side of the pool, a release under the water, then lifting them up to hold onto the side. The idea is to get them used to swimming a few strokes to the side of the pool and holding on. Last time the instructor did the move, but this time it was our turn. Amélie did it twice as the instructor demonstrated on her first.

This went pretty well but when Amélie was holding on at the end she let go and swallowed a bit of water. She was quite unfazed though, a few seconds later she was doing the move again with me and managed to hang on again.

The first new routine was to sit them on the side of the pool with a ball. The instructor told us to get our babies to throw the ball in, we were then to say 'Humpty Dumpty sat on a wall, Humpty Dumpty had a great fall ... ' before splashing them in to retrieve the ball.

I knew there was no way Amélie would willingly throw the ball in, so I batted it out of her hands. She seemed to really enjoy this but wanted to jump in before I finished the rhyme. We did 3 sets of this and then it was time for another new move.

This was done with a teddy bear float. It is similar to the surfing routine where your baby lies on the float on their tummy as you surf them around the pool. The addition is that the instructor says 'Over The Bridge' now and again and you are to lift baby and float up out of the water and back in again as if you were taking them over an invisible mini hump back bridge.

As you splash them back in there is quite a splash and they are going almost head first. If a giant were to do this move with me I'd be pretty scared and excited, so it was odd to watch all these babies taking it in their stride. 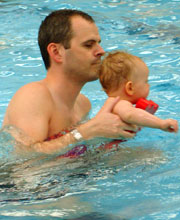 picture of baby swimming on float

Next was another new routine that I'm going to have a hard time explaining. You are in the surfing position with your baby on the float on their tummy. They are at your side and you are holding them with one hand each side of the float. Your thumbs are making contact with your baby and your fingers are in contact with the float, so you are kind of holding your baby and pinning them to the float. This is exactly the same position and grip used for the regular surfing, and the previous routine.

I know us left handers are rare so I'll describe the 2 rolls from the point of view of a right handed person. Your baby is on your right on the float, your right arm passing over their body and right hand holding them at the right. Your left arm passes in front of your tummy to hold your baby and float at their left. For the first 'roll over', you turn to you right and at the same time you push away with your left hand and pull towards you with your right hand which will start to flip your baby and float over.

You are now walking backwards, your baby is on your left, on their back, with the float on their tummy. Your left arm passes under the water and under your baby holding them at the far side, and your right arm passes over your body to hold baby and float at the near side.

The move is done in one action, I just broke it down to 90 degrees then 180 degrees to explain the mid position. On the second 'roll over' you reverse everything you have just done, so you turn to your left 180 degrees and flip your baby with float back over and you are moving forwards once again.


Remember to check out our diagrams section , there are a few routines like this that really need diagrams to explain. If the diagram isn't there yet for any particular routine then keep checking as we are updating them all the time.

I think that was all of the new routines explained, I'm aware this article is getting pretty long so I'll end there and report back on next weeks lesson.