The last lesson of the intermediate course was today. Next week we start the advanced course.

picture of baby swimming with float

Perhaps it was because Amélie had a 2 week break from swimming, or perhaps she hasn't fully recovered from her illness she had about 10 days ago, but she cried for the first time in many lessons today.


The instructor asked if we wanted to have another go, which we did with no drama at all. The rest of the lesson Amélie was smiling and there was no more crying. 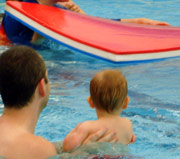 I wish I could publish the pictures of this because there are so many people smiling in them, but obviously we can only publish pictures of myself and Amélie. The photo here is of us approaching the float.

We did the paired up underwater swim that was introduced a few lessons ago. There was an extension to it though. Like the regular paired underwater swim you stand facing the other parent about 5 feet or 1.5 meters away. You both hold your baby to your right in side holding swim position, count them in with 'name ... ready .... go ...' and set them off swimming underwater towards the other parent, before catching the other baby on your left.

The extension is to bounce around in a very small circle with the other parents baby, ending up in exactly the same position as the start of the routine except you are now holding the other baby. You then repeat the move and wind up holding your own baby.

We were first, and as I caught the other persons baby and started bouncing around in a little circle, it was a really great feeling to see them looking up at me, trusting me, and happy. It felt like a great privilege to be a small part of their journey learning to swim.

We did many other routines that I've covered in previous articles, humpty dumpty, ring a ring a roses (the underwater part shown in the image), surfing, over the bridge, horsey horsey, emergency hold on, chase the ball, and finishing with back floating with a woggle.

In last weeks article I mentioned we had been playing our own games at the local swimming pool. One of which was Amélie doing a sitting dive from the side of the pool. The problem I had in this lesson was that every routine that involved her sitting on the side was compromised by her wanting to immediately dive in.

I had to struggle to keep her sitting on the side while we were giving instructions, saying a rhyme, or trying to get her to throw a ball into the pool. I'm hoping that she will learn to differentiate the different routines and games in time.

Before I close, I had a question from the Website this morning about how long the lessons last. The formal lessons are 30 minutes, and when we take her to the local pool we spend pretty much the same time in the water 30-35 minutes.

Next week is the first lesson of the advanced course. All being well I'll be posting that article next week.

MummyQai
Luv your site, as i am teaching my 10 months old daughter Qaisarah to swim in our Condo pool. A bit too late huh!... How I envied both of you and Amelie for all the great times in the pool since 6 weeks of age. Again need to say this, this site and especially the diargram is very-very helpful... Thank again will post any question later after our second session.....