As I usually only go through the new routines, I've expanded this article to cover more of the lesson as a refresher. There is still new material though, including me swimming through a hoop. This is going to be a long one.

picture of baby on float

There was just 4 of us again today, we tend to chew through more routines when there are less of us. Great for the babies, but tiring for the parents. We started as usual, to refresh I'll go through what we do at the start of every lesson.

We bounce our babies up and down while walking around in a circle. In the early lessons we did this crouched up to our shoulders in the water. As the weight of our babies has increased over the course of the lessons, one by one we have had to do this up to our waists in the water standing straight up.

We follow this with a couple of circuits of side holding swim position, with our babies on their front held to the side, with one elbow resting on their bum (all these positions and routines are described in previous articles). The instructor will shout instructions to spin around 360 degrees in a circle from time to time.

Then we will go back and do another lap or so of bouncing up and down before doing side to side swimming. This is the same as the previous swimming routine, but you are snaking your baby in a zigzag as they swim.

Every so often the instructor shouts 'and around in a circle ...' which is our cue to spin around 360 degrees with out babies. When we complete the spin she shouts 'and up in the air' and we lift our babies right up as high as possible, before splashing them down again into the water. The instructor then shouts 'and around the other way ...' which is our cue to spin 360 degrees in the opposite direction to before, which is followed again by 'and up in the air'.

We do a couple of sets of that routine and then 3 sets of name, ready, go. This is where you support your baby in one arm (I also use my knee) and say '(your baby's name) ... ready ... go ...' before scooping up a handful of water and splashing it over your baby's head.

After that we go back and do 2 sets of splish splash and 3 more sets of name, ready , go. We may leave it at that or perhaps do another lap of splishing and splashing.

This is how we start every lesson, you can see why I leave it out of the articles. Obviously the first ever lesson we didn't know the techniques yet, but every lesson since has more or less followed the same start pattern. The start routine has always at least included splish splash, bouncing, and 2 sets of 3 name ready go.

Next we did some humpty dumpties. Amélie has this relatively new problem of wanting to immediately jump into the water when you sit her on the side of the pool. I have to stand up to keep her from jumping in too soon. We did 1 humpty dumpty followed by a width of bouncing, and another followed by a width of side position swim with an underwater rail swim at the end. We did one more humpty dumpty with a splash and moved onto 'monkey, monkey, monkey'.

I ran through this in the previous article, in the first image you can see Amélie has just let go with her right hand and is holding on with her left (the command is 'name, ready, jump!'). I'm to her right and take her right hand in my left. both our hands should be much higher than in the image, Amélie missed my hand so in the image our hands are under the water. I then turned to my right as Amélie let go completely and I supported her under her body with my right hand.

picture of dad and baby swimming

In the next image you see I'm almost halfway through the little circle that I swim her in. My left hand has let go of her and she is only supported by my right hand. I then complete the circle and encourage her to hold onto the rail again. Amélie and I are bottom of the class still as the other babies hold onto the rail on command. Amélie will hold on if she feels like it.

The next routine was back to chest kicking. Check the diagrams and previous articles where this is introduced. You are moving backwards, baby's back to your chest, and you are helping them kick their legs. We did this in a big circle, and from time to time when the instructor told us we did a 360 degree pirouette. At the end of the routine we paired up facing another parent and baby as our babies kicked their legs and splashed us.

The instructor held her at the side of the pool facing out. I stood facing them about 3 meters away towards the middle of the pool. Between us was another parent holding a hula hoop under the water. The instructor said 'Amélie ..., ready ..., go ...' and performed the glide swim with Amélie, both of them passing through the hoop. At the end she released Amélie under the water and I picked her up as she swam towards the surface.

This was interesting because of Amélie's expression when the command was given. You could see her preparing to hold her breath and mentally preparing for her face to be submerged. It was quite an urgent look on her face. After the demo I switched places with the instructor and got to have a go myself. A great way to spend my morning, lots of fun gliding underwater through a hoop with my daughter in my hands in front of me.

We also did the holiday swim, I think I may have got the order wrong because I seem to remember doing this after the 'jumping off the rail' routine. You can see our attempt in the picture, if you can take your eyes off my huge nostrils and dumb expression. Amélie isn't holding on properly and fell off moments after the photo was taken. Another bottom of the class routine for us both.

Teddy bear floats where then handed out (you can use any little float) for a spot of surfing. The instructor shouted out different surfing techniques now and again and we obliged. 'roll onto babies back', 'roll on babies front again' 'over the bridge'.

After this we stood in a circle to do the 'wave', which is where we all surf towards each other and meet in the middle before lifting our babies up facing each other for a 'hurray'. It's called a 'wave' because we make a wave with the float as we surf in towards each other. Next we did a spot of chasing the teddy for a minute or so.

picture of baby sat on float

picture of baby falling off float

This was followed by 2 sets facing in while singing 'row, row, row, your boat gently down the stream. If you see a crocodile, don't forget to scream'. On 'scream' the babies are to slide off into the water scuba diver style. On the second go Amélie got on all fours, turned around and surprised everyone by diving in head first. She really took a big dive and you can see me here trying to retrieve her.

picture of baby being retrieved from the water by dad

If I'd never done these baby swimming lessons, and seen my 10 month old baby fall into a swimming pool I'd have had a heart attack. She would have probably taken in a load of water, and come out screaming and crying. I'd have beaten myself up about being a bad parent, and I may have given her a fear of water in the process. As it happened though both baby and dad were relaxed, the second picture was taken seconds later as I retrieved Amélie after her fall. You can see me with a dumb grin on my face and Amélie seems calm. In fact the next picture was taken during the next routine and she looks very content.

picture of baby climbing onto float

This was a new routine called 'run run run'. Baby climbs onto the float, you may need to give them a hand climbing up. One person holds the float steady and holds one of you baby's arms once they manage to climb up. You are then free to walk around and hold the other arm. 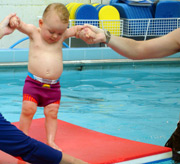 picture of baby walking on float

Then you tell them to 'run run run' and run (more of a walk) them from one end of the float to the other. Jumping into the water at the end. The image shows Amélie half way through her 'run'. We did this routine twice each.

At the end of the lesson we usually do back floating to 'twinkle twinkle little star', this was replaced with a new routine this week. 'The grand old duke of York'.

We repeated the routine but at the end we lifted our babies up for a 'hurray' rather than doing the underwater part. After the lesson the instructor came to see each baby and gave them a high five. With that another exhausting lesson was over.

Next week I'll go back to a shorter account of events. For this article I thought it would be good to have a full lesson feel like the first articles.