Our baby has now grown out of some of the techniques we used when we first started swimming, so today we had to make some adjustments. 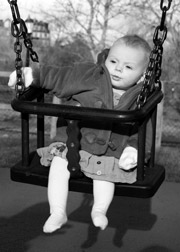 picture of baby on swing

'Don't Babies change so quickly' is the cliché, however their rate of development can at times be startling. Amélie is only 5 months and 10 days old, but she has 2 teeth, knows her name, holds her own bottle, feeds on mashed carrot from a spoon, sits in the supermarket trolley, and happily holds onto the chains of the swing as we push her in the park.

At the weekend I was pushing Amélie in her push chair and there was a woman in front with a pram. I thought we would have something in common, a young baby, but as I approached I saw that Amélie looked like some kind of giant mutant killer baby compared to her 'normal' baby.

Amélie only has a little light hair but there are other children her age who look even more advanced with their thick dark hair. There really is a world of difference from one month to the next, was it really only a few weeks ago when Amélie discovered she had hands? 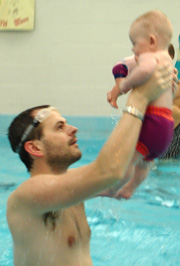 In the lesson today we did all of the latest moves, lots of the side holding swim position, last weeks 'daddy ... ready ... go ...', some underwater swims (2 together with goggles), and some of the classics (humpty dumpties, bouncing, splish splash etc.). The move that was introduced in the lesson was a new underwater swim.

This technique is very straight forward, side holding swim position, constant motion, then submerge your baby for a couple of seconds and back up again. The other babies all did this but on our turn I didn't submerge Amélie because she was showing signs of being a little bad tempered by that stage.

When we did the 2 backstroke positions (cradled head, and the first one we ever learned) there was no way Amélie would settle. She tries to sit up and there is just no way she will relax and float. So the instructor told me to get low down in the water and rest Amélie on my chest/shoulder cheek to cheek. This is very similar to the backstroke technique we learned 2 lessons ago where you kick their legs for them. The main difference being that your outer arm comes over their chest, instead of holding their leg below the knee. She is still on her back and we are both moving backwards through the water.

We had a few minutes of crying during the lesson. My feeling is that she was bored, I put some extra oomph into the bouncing and splashing and this did the trick most of the time. I also found that during the side holding swim she didn't like it when I put my face close to her. She was much happier when I ignored her.

At the start of each lesson we are told to do 3 cycles of pouring a cupped handful of water over our baby's heads. I'd been skipping this for the last few lessons because it used to set Amélie off in a bad mood. Today I reintroduced it and she was pretty nonchalant, so we will be doing this every lesson again now.

The feeling I'm left with after this lesson is how much all our babies have changed since those first few lessons at the end of Autumn. They were all so small and passive as we put them through their paces. Sometimes it was all you could do to keep them awake. Now as we move towards the end of Winter they are all so big and alert, with recognisable characters. At this rate by the Summertime they will probably be rolling out little diving boards, and teaching them the butterfly stroke!

Laura
just a note to say how much i appreciate your "series"!!! here in the states swimming before 6 mos is rare. i'll be recommending this site to all my other new mom/dad friends! thank you!