Amélie will be 17 months old next week, and this morning she had her 12th toddler swimming lesson. This article covers her latest 2 lessons, and I've tried to include more pictures than usual as the last few articles have been low on them. There is only one new technique but I would recommend reading this article as there is a lot more in it than usual.

In our baby swimming articles there was so much to cover in each lesson. The toddler lessons have much less material so we have started covering 2 lessons per article. Both lessons 11 and 12 were very similar although there was a new technique in lesson 12. The lessons were similar on another front, as both times only myself and another parent turned up. So there was only 2 of us in each lesson instead of the usual 5 or 6.

[As promised I'll post a load of images in this article. I may break off from the main thread of the article now and again to mention what is happening in each image. This one and the next are of me paddling Amélie's arm to get her to use it more. We call these 'Tiger Raaar's' and we roar like a tiger to encourage the toddlers to do it on their own. Sometimes we have the teddy bear float under them, and sometimes we just support them with our other arm. In the first image I've just paddled her arm under the water, in the second we are out again and coming down for another paddle.]

In lesson 11 the instructor introduced some diagrams. The diagrams were cartoon drawings of the routines we did. To be honest they were of no help at all, and I think they are a waste of time (especially as our instructor really is excellent). At the same time these new diagrams were introduced we were reminded that the lessons were to teach the parent to teach their child to swim. Again, I'm not sure they needed to point that out to us. (I think perhaps there has been a good intentioned new initiative as the Waterbabies franchise expands.) The rest of lesson 11 followed on like the previous 10 lessons.

We always start with bouncing, then splishing and splashing, then 'if you're happy and you know it', and then the instructor takes each baby for a swim, followed by a '1 2 3 surface swim' back to the parent and then a high 5. The picture shows a woggle swim towards a floating toy. Amélie was a natural when she started out, but for a while now she has stopped kicking her legs. Content to float around rather than propel herself. In lesson 12 however she was much improved and kicking again. We do a woggle swim in pretty much every lesson and follow it up with 'horsey horsey' on a woggle.

At the end of a hard day's work I usually emerge from my office and venture into the lounge. I sit down, put my feet up on the coffee table and turn the news on. This is when (thanks to the swimming lessons) Amélie comes over, straddles my legs, puts her full weight on my legs, and sings the 'horsey horsey' song. Cute the first few times, but by now it's cured my bad habit of putting my feet on the table faster than a lifetime of nagging from my Mother and a string of girlfriends.

The next few pictures show a surface swim under an expertly constructed impromptu bridge. We do many different surface swims. We do the one from instructor to parent at the start of each lesson. We do one towards the side of the pool finishing with the toddler holding onto the side. We do one through a hula hoop, one through a woggle bridge, and one like today through a bridge of floats. Sometimes we throw a ball over the bridge for the toddler to collect on the other side, and sometimes we don't.

This particular surface swim is a '1 2 3 surface swim'. I send Amélie forward for a fake swim and say '1' then bring her back and say '2' then forward again for '3' as I let go of her. As you can see she has made a pretty good job of keeping afloat and swimming forward. She doesn't always do it that well but on this particular day all of her surface swims were very good. (The instructor will collect her at the other side.)

This second time is a little different. We have just been swimming around the pool in side holding swim position. As we approach the bridge I just say 'Amélie, ready, swim' and let her go in one motion without stopping. This is a continuous swim rather than the previous '1 2 3 surface swim' which starts off from standing still. I walk around the bridge to collect her at the other end, the instructor usually has to catch her for a second before passing her back to me.

[This last picture of the bridge shows Amélie a few moments after I've let go and I'm walking around as she tries to swim on the surface.] At the end of lesson 11 the instructor has a chat with us. She said that during the baby swimming lessons our children kicked better, and paddled their hands better, as it was instinctive. Now they had lost much the instinctive swimming reflexes and there was a little step backward as they learned to paddle and kick consciously. I was very reassured to hear that, as Amélie has seemed to have lost a little of her natural ease getting around the pool. 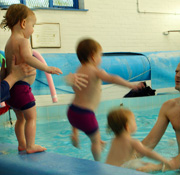 Splashing in from the side is another thing we do a lot of. Again there are a few different routines, the one in this picture is a standing jump. All standing jumps start with 'toes on the edge' which is the safest starting point. Here the instructor is holding and launching, Clare took 3 quick pictures and I've tried to get them into one picture so you can see it in action. What you don't see is the very end where Amélie is completely underwater. We usually do 3 of these in a row, and often go straight into a 'hold on' reinforcing the instinct to swim for the side and hold on should they fall into a swimming pool. Another splash into the pool routine are the 'humpty dumpties' which are done from a sitting position and which we have done since the baby swimming lessons.

This next picture shows a 'ready dive' which is done from a sitting position. We call the way I'm holding her the 'sandwich grip' and I use that grip to follow through a head first dive into the water and back up to the surface again. Sometimes I do the exact same routine but hold her with one hand either side of the body much like side holding swim position rather than this 'sandwich grip'. We did this in lesson 12 this morning and dived under an impromptu bridge made our of a bent woggle.

Another splash in technique is being thrown in by the instructor. The instructor sits on the side and throws the toddler in. This picture shows this technique at the point where Amélie has splashed into the water. You can see the instructors hand to the left, and can probably just make me out at the right ready to catch Amélie and bring her to the surface.

The other splash in technique is the standing jump without the instructor holding them. Here you start as normal with 'toes on the edge' and hold your child's hands up as you tell them to 'jump'. With some luck they will jump in and you have enough control to help them get far enough away from the edge that they don't bang their heads on the side of the pool. In the picture Amélie is performing a tentative step into the pool, but at times she will do a real jump in!

This next picture shows the end of a 'torpedo'. This is where your toddler holds onto the side of the pool and you pull them back and away from the side very quickly. This has to be one of Amélie's favourite routines. Some she enjoys, some she endures, and some you can see she finds quite pleasant, this is one of the ones where she giggles and looks thrilled. Which brings us to the brand new technique of which I've completely forgotten the name so will call the woggle torpedo. It is similar to the torpedo, but the parent has a woggle bent around their back. The woggle is enough to support both toddler and parent.

In the regular torpedo you are not supported. The previous picture shows a perfect torpedo, this hilarious picture shows a not so perfect example. I've been somewhat over exuberant pushing off and have sunk, and yes I did breathe in and choke on the water. The picture was taken just before I received a lung full of pool water. Had I been alone, I'd have taken a 1 minute breather but the lesson marched on.

This image shows the woggle torpedo, it begins just like the regular version but you won't sink like a stone if you mess it up. You can then kick your legs and propel both you and your toddler backward across the pool. I'd have liked to spend more time on this, as I could see Amélie getting the idea that it was my legs kicking that was powering us around the pool. I can't wait to go to the local pool and test this one out.

I've not yet seen a toddler manage to climb from water level onto the float without help. I usually give Amélie a big push to get her started, today she really pulled herself on well. Sometimes she just lies there like a beached Whale and I've got to practically move her limbs for her. We did this twice today, and each time she climbed up with relative ease. I think if we had more time she would climb up on her own, I also think she would stand up and walk without us holding her hand if we just steadied the float. The lessons move at such a pace though that the whole routine probably takes less than 20 seconds. 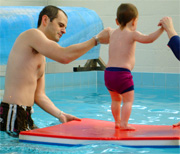 Once the child has walked to the edge they jump off. They always go underwater, sometimes we keep hold of their hands, and sometimes we let go just at the moment they have committed to the jump. Today we rolled a ball across the float to give our toddlers an incentive to cross the float, so as soon as Amélie surfaced we swam off to retrieve the ball. In most lessons we also do a section where we throw sinking toys into the water and do an underwater glide swim to retrieve them. In the latest 2 lessons we haven't done that but I thought I'd mention it anyway.

Next was wibble wobble and row row row your boat. We do 3 sets of each. Here Amélie is the last one on the float and is just about to fall off. Her feet are facing in so it's a 'row row row your boat' rather than a 'wibble wobble'. I've probably said this in more that one previous article but I still find it incredible that these children can happily tumble backwards into the water. I know children twice their age that don't even like having their hair rinsed in the bath, when I was young I was one of them!

'd better stop before this article ends up too long, but we have covered a lot of ground. I thought I'd finish up with a picture of Amélie smiling, because after all that's the most important aim of the lessons.