After a short break for half term, the swimming lessons have started again. So this morning we took our 14 months old daughter for her 4th toddler swimming lesson.

Over the past year I've written about 40 articles covering baby swimming lessons. Occasionally there was a lesson where there wasn't much new material. Sometimes there was so much new material it took me most of the day to write it all up. Most of the time though there was a good balance and I always thought each individual article was worth writing (and from the positive comments we get, worth reading too).


It's early days for the toddler swimming lessons, but the pattern so far is that we mainly follow the same routine. There are perhaps 1 or 2 new routines, but these are often made up from existing routines that are stitched together. The routines may miss out something from the previous lesson, and replace it with something from the significant repertoire built up from the baby swimming lessons. All in all though the lessons thus far have been pretty similar. 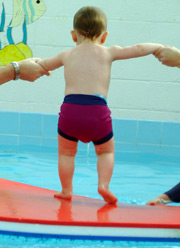 picture of baby running on float

Today was no exception. We did almost exactly what we did in the previous lesson. The main difference was with the float at the end of the lesson. After the 'wibble wobble' and 'row row row your boat' routines we usually do a 'run run run'.

For this we have our toddler climb onto the float, stand up, and run over and off the other end of the float. We usually have to help them climb on, and the instructor holds one hand while the parent holds the other as they stand and run. 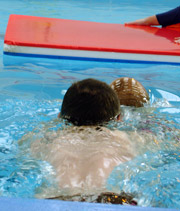 picture of glide swim to the float

That was the only real difference to the previous lesson, so rather than waffle on I'll keep this short. If this trend continues and the articles are very short, perhaps I'll put multiple lessons into each article. You never know though, perhaps next week there will be an action packed lesson with loads of new techniques and routines! I'll let you know next Monday.