There hasn't been much new material in the last few articles, but today there was some progression. The most obvious of which was jumping in from the side.

The lesson plan was similar to the recent lesson plans so I'll concentrate on the differences. The first of which was a focus on moving forward with surface swims. We get the toddlers doing 'tiger rars', which is moving their hands and arms like a cartoon tiger would. It's really just doggy paddle but we try and make it interesting and fun. The whole time we are also mimicking the roar of a cartoon tiger, shouting 'rrrrarrrrr rrrrrarrrrr' while the toddlers are pawing at the water.

I wanted to point out though that her face is in the water. She hasn't learned to lift her head out of the water while swimming. Also it's not exactly fish like, it's a pretty remedial swim. It occurred to me that parents may think Amélie is swimming like a dolphin and wonder why their toddler isn't. On a good day she will kick her legs and paddle with her arms. Other times she may just lay still and float. 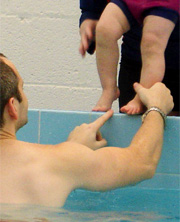 Next was a brand new technique, jumping in from the side. A good time to remind readers that if you want to try out anything you find on www.bringemup.com you do so at your own risk. Basically your toddler stands on the edge of the side of the pool. The instructor stands behind helping support and preventing them from falling backwards. The command you give is 'toes on the edge'. The instructor stressed the following to us. Kids can get so excited jumping into the pool that they don't concentrate where they are jumping from, and end up jumping from too far away and hurting themselves. 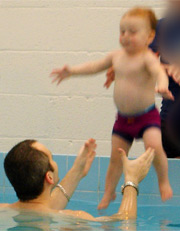 Most of the toddlers understood the instruction and placed their toes on the edge. Then the parent said 'name ... ready ... jump' and the toddlers jumped in and were retrieved by their parent. The instructor launched any toddlers in who didn't look like they were going to jump. None of the toddlers really did a perfect jump in, but it went pretty well considering it was the first time. We did this 2 or 3 times each.

I suppose I'm getting blasé about how comfortable and brave these toddlers are in the water. I expected them to be quite happy to casually jump off the edge of a swimming pool for the very first time. Indeed they are, but if you step back for a moment it's pretty extraordinary really.

When we do wibble wobble and row row row your boat at the end on the big float they really tumble into the water. The picture here is of the surfing routine we did this morning. You can see by the big splash that it's not exactly gentle play. I can assure you though, all the kids enjoy the sessions, and Amélie is frequently laughing and giggling.

Next we did 'Monkey Monkey Monkey' just like last week Amélie went right like a dream, but when all the other toddlers went left she continued to go right.

In between we did jumping off the rail. This was done through a hula hoop, then the toddler swam in a circle supported under their chest by one of the parent's hands. At the end of the circle they went through the hoop for a 'hold on'.

Next was the final new technique. We were given sinking toys, ours was a pink seahorse but anything that sinks would work just as well. You throw the toy out, and do a glide swim. Ideally your baby will reach out underwater during the glide swim and pick up the toy. If not you can reach out and get it, then pass it to your child while you are still both underwater.

Unfortunately I messed this up big time. I didn't throw the toy out far enough, so before we even began the glide swim we were past the toy. I managed to reach back and grab it but it really was dreadfully executed. We only got one go so I don't have the opportunity to redeem myself.

At the end of the lesson we did the grand old Duke of York. After one verse we go underwater with out toddlers facing away, while under the water we turn them around to face us, and we both surface together saying 'peekaboo'. After another verse the lesson was over and Amélie was giving the instructor a high five.

As I got out of the pool and helped Clare change Amélie, it was hard not to notice the big bump. Clare is heavily pregnant and in less than 2 months hopefully we will have a new baby. In the car on the way home we were deliberating who should take the new baby to the baby swimming lessons. Clare thinks, I should because of the strong bond it has built between my daughter and myself.

I think Clare should do it because it's an unmissable experience, and it's her turn to have that. I guess we could do alternate weeks, but I think there is a lot to be said for a certain activity that is between just one child and one parent. For Amélie and I that activity is swimming and I wouldn't trade that for anything. Which is why next week I'll be at that next lesson and reporting right back.